Which Type of Home Alarm Should Your Choose? 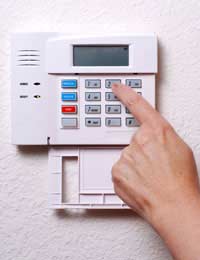 A home alarm is widely accepted as an effective method of deterring a burglar, but choosing the right one can be an ordeal in itself.

Choosing the right alarm system can be a confusing and stressful operation. Not only are there are great many options to choose from but the significance of any decisions could be critical – what reassurance is an alarm that doesn’t operate properly?

The numerous alarm systems on the market range from the cheaper DIY sets to sophisticated and expensive systems. A basic alarm setup would usually include an outside siren or bell fitted inside a weatherproof box, a key or keypad operated control panel and a number of passive infrared movement sensors.

Nevertheless all the alarm types fall within two distinct categories: type A and type B.

The B Type – The Audible Only Alarm

The B Type is probably what most people think of when think of a home burglar alarm. It is one that emits a loud outside siren or bell blast when it is set off, and relies on a neighbour or passer-by to hear the noise and call the police.

Its ‘B’ grade refers to the level of priority it receives from the police services, a secondary status due to its unreliable system of detection. Of all the many thousands of calls the police receive every about a suspected burglary, very few are genuine.

The potential waste of police resources resulting from false alarm reports has prompted a national policy relating to B type activation. In a nutshell, a type B alarm siren is not enough to warrant a call out, they need some additional evidence first. This could be the sound of breaking glass, the sighting of a suspicious person or a strange light.

The A Type – The Monitored Alarm

Type A is the priority alarm, the one the police respond without reservation. Instead of being reliant on the general public to act upon its siren, it is monitored by a private security station, which if necessary informs the police on a dedicated line.

As well as being favoured by businesses, this ‘remote signalling’ system or ‘police call’ is particularly appropriate for houses isolated from neighbouring residents. Nevertheless many households in built up areas prefer to rely on dedicated security monitors as opposed to their neighbours, and are willing to pay extra to be an A list priority for the police response services.

For the DIY enthusiasts there is always the option of buying the alarm system from a hardware store or DIY superstore and fitting it yourself. Nevertheless this should not be attempted unless you have the appropriate practical and electrical skills. An alarm that is not correctly fitted will be less reliable and, through false alarms, cause a nuisance. It could also end up costing you more.

A popular additional feature to the basic alarm setup is the auto-dialler system. On activation of the alarm, this will ring pre-programmed phone number to inform friends, neighbours or family of the alarm emergency.

Whichever alarm you choose to invest in, make sure that it is trade-approved. This refers to systems carrying the British Standard BS6707 kite mark. Also, if a professional is installing the alarm then they should be checked for their BS4737 credentials.

The home burglar alarm is intended as much as a visible deterrent as it is an active detection system. For this reason many people think they can save the costs and trouble involved with setting up a proper alarm by simply attaching an empty bell box to the front of the property.

Although this method may have a certain deterrent effect, many burglars are adept at recognising an empty box, and also many don’t actually notice the alarm box until it starts wailing.

All About Advanced Home Security Systems