All About Advanced Home Security Systems 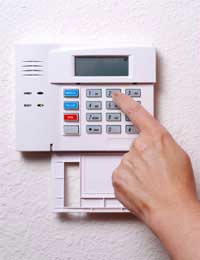 Crime statistics show that even just by fitting some basic security features, such as mortice locks and window locks, you are drastically reducing the risk of being the victim of burglary. But what if you still don’t feel secure and have the money to splash out on something more advanced. What is on offer at the sophisticated end of the home security market?

Increasing fear of crime and technological advances have gone hand in creating a home security market that is awash with gadgets, from CCTV cameras to electronic gates to smoke machines. Of course such sophisticated devices are not designed for the penny-pinchers.

A camera surveillance setup could cost a homeowner anywhere between £500 and £10,000, depending on the size of the property and the features included. Some hardy steel doors to make think twice about kicking their way in will cost anywhere from £2,000.

The idea behind electronic gates is in moving the first line of defence from your front door to your front gate. With the aid of an audio or video intercom system, residents can control who enters their whole property rather than just their house, thereby making them feel more removed from the outside world and protecting their shed, garage and grounds into the bargain.

Such a private and enclosing security measure means it only suits large detached properties in areas where community spirit and neighbourliness are a very minor consideration. Nevertheless the cost of between £3,000 and £10,000 will put off the more modest home-dweller from even being tempted by the indulgence.

One interesting new member to the security hive is the Smokecloak. The function of this James Bond-like gadget is pump out thick black smoke when a burglar enters the property, thereby making it impossible for them to see what they’re stealing and creating general chaos and confusion. The idea is that the burglar will be scared off by the fog – but if only if they can find their way out.

With as many as 4.2 million CCTV cameras now keeping watch across the nation – that’s one for every 14 people - the UK is being described as a ‘surveillance society’. It's therefore not surprising that the CCTV eye is beginning to peer over into the home environment too.

With the aid of a home multiple camera CCTV system householders can keep an eye on all parts of their property – from their children playing in the garden, to seeing who is at the door – from the comfort of their living room. Most modern systems can be integrated with the TV, enabling users to, for instance, flick the channel to the garage camera when they hear a noise outside.

More advanced systems allow footage to be recorded, and the ability to tilt, pan and rotate the camera to achieve maximum coverage.

That other ‘eye over the nation’, the web cam, is also having an increasing impact on home security. Only recently BBC news reported a case where a burglar was caught because a web cam system, activated by the motion of the intruder, recorded them in the act. Even though the computer itself was stolen the images were automatically sent to an e-mail address. The first the burglar knew of the web cam snaps was when they were shown them whilst later in police custody.
Next Page

How to Choose an Alarm Company for Your Home Alarm