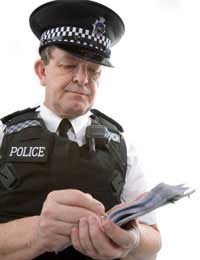 It seems there are few other countries in the world that enjoy raking through crime statistics as the UK - they are seen as a key to its social ills. But how well do you know the nation's crime figures?

1. On average how often does a crime take place in England and Wales?

2. According to the latest British Crime Survey, what is the average likelihood of you being burgled?

3. What is the most popular time of day for burglaries?

4. What percentage of burglars would reportedly be put off

...from breaking into property with a burglar alarm?

5. What is stolen in a half of all robberies?

6. Who is the typical homophobic hate offender?

7. Who is the most likely to be a victim of violent crime by a stranger?

...place it second only to which country in the EU?

10. According to a recent Home Office survey what percentage of 10 to 25-year-olds

...have carried a knife in the previous 12 months?

11. For every one teenage death caused by a knife attack

...approximately how many cases of hospital treatment for non-fatal knife wounds are recorded?

12. How Many CCTV cameras are currently watching over Britain?

13. What percentage of street robberies in London are now reportedly solved

14. What is biggest culprit for the dramatic rise of online banking fraud

...but where did it take place?

(A) The murder of five prostitutes in the Ipswich area
(B) The rape of seven women and girls around the Kent, Surrey, Berkshire, Hertfordshire and London areas
(C) The murder of 13-year-old school girl Amanda Dowler
(D) Conspiracy to commit robbery at the Securitas Depot in Tonbridge, Kent

Quiz: Are You a Security Savvy Householder?

Quiz: How Street Smart Are You?