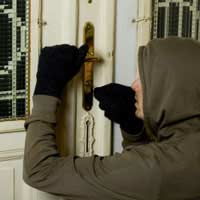 Contrary to the Hollywood stereotype, most burglaries are not planned weeks in advance by grizzled criminal masterminds. 80% of burglars are green opportunists who choose their targets on the spur of the moment, using gut instinct and telltale signs as a guide.

Recognising and avoiding the signs that scream ‘target’ to neighbourhood criminals is an effective way of making a property less vulnerable to burglary.

As much as burglars look for vulnerable properties, they are also on the look out for houses that look like they’d be worth breaking into. There is little point, for example, breaking into a house because of its poor security only to find that there is nothing in it worth stealing. ‘Target homes’ are the properties that maintain a burglar-tempting balance of lax security and good content value.

For a home to avoid being classed as a target home, it needs to maintain a decent balance of low temptation value and good security.

Many people take great pleasure in flashing their wealth, whether it’s their designer clothes, expensive jewellery or gleaming sports car. But of course the downside of showing off their spoils is that it attracts an undesirable element.

Just as someone walking the streets listening their iPod whilst displaying their expensive jewellery is at greater risk of being mugged, a house whose assets are on show to the stranger in the street is more likely to be targeted by burglars.

This does not mean that a property should be made to look unloved and dilapidated, but simply show a degree a restraint and discretion. Expensive TV sets and Hi-Fi systems should not be visible from the street, for example, and expensive bikes should not be left outside, whether they’re locked up or not. These are all telltale signs, they tell the burglar that there is more where that came from.

Of course there are many instances when the financial well being of a homeowner is impossible to play down, perhaps they occupy a grand Georgian townhouse or have a sports car sitting out front. In this case, the security level needs to be raised in direct proportion to the temptation value, thereby tipping the balance out of the favour of the burglar.

As a rule the more expensive a property appears the higher the security level needs to be. As a house’s desirability increases, so does the temptation for the burglar and the risk they are willing to take. In response the security should follow accordingly, always maintaining a level where the burglar thinks it’s not worth the risk.

Just as telltale signs of riches attract burglars to a property, telltale signs of good security repel them. Thus at the same time as the householder is at pains not to show off their assets, they should be flashing their security for everybody to see.

Half the value of security is its power as a deterrent. This is why someone might put up an empty burglar alarm box, or hang ‘beware of the dog’ sign, despite only having a Golden Retriever puppy. When investing in security it is therefore important to make sure the window locks, the lights, the burglar alarm bell box, all make their presence known. Householders that are part of a Neighbourhood Watch scheme should advertise the fact with stickers placed in the windows facing the road.

Even if the idea of security is to firstly deter a break-in attempt, there is no excuse for not backing it up with a solid defence. Besides, empty burglar alarms are easily recognised by burglars, and a telltale sign of lax security.

Burglars are also on the look out for the house that appears empty and are attracted by telltale signs such as drawn curtains during the daytime, no lights after dark, post left piling up by the door, and full milk bottles left out in the cold.

Householders should avoid becoming a target by making their home look like it is occupied all the time. For instance, they might leave the radio and the lights on when they are out, or if their post is visible from the street then ask a neighbour pick it up when they are away on holiday.

Importance of Protecting Your Home